Here are some interesting numbers regarding voter turnout.  Hopefully we can get more people to make their voice heard!!

• V.A.P. = Voting Age Population
1) from 1972 includes citizens 18 years of age; 2) V.A.P. includes those ineligible to vote such as felons. Because of this, V.A.P. figures are naturally lower than if the Voting Eligible Population (V.E.P.) is used as the denominator.
• REG = Registered to Vote

*Note: Total REG data is incomplete or unavailable in some states, making it appear in some years as though more people voted than were registered to vote. From 1976 through 2004, this is due to the fact that North Dakota does not have voter registration, and in Wisconsin eligible voters may register to vote at the polls.

Here is an article from Fair.org covering “Democracy Spring.” Democracy Now!‘s coverage (4/12/16) of the Democracy Spring protests against money in politics.

More than 400 people were arrested in a non-violent sit-in on Capitol Hill April 11, many having marched 150 miles from the Liberty Bell in Philadelphia. The protest, calledDemocracy Spring, is about ending the influence of big money in politics and ensuring free, fair elections through things like restoring the Voting Rights Act. The next day, another 85 mostly elderly people were arrested, many chanting, “Democracy is not for sale, [we’re] not too old to go to jail.”

Yes, there: 150 or so words on the arrests, with the Post saying the organizing group seeks to prevent “what it called ‘voter suppression.’”

As of April 14, the New York Times had yet to report in print on the demonstrations and mass arrests in the nation’s capital. Research by The Intercept (4/12/16) noted that cable news, with all that time to fill, also took a pass. As of April 12, CNN had done nothing, MSNBC mentioned the protests for approximately 12 seconds, while Fox Newsgave them about 17 seconds. Later CNN (4/12/16) put a short item on its website.

One has to wonder why Beltway reporters, self-proclaimed political junkies, have such a profound lack of interest in following that line of inquiry.

Just wanted to provide you with an update on our last teach dealing with the possible merger between NextEra and Hawaiian Electric.  Check out this article from Utility Dive:

‘Wake up worrying’: NextEra-Hawaiian Electric merger in doubt as regulators near decision time

Maui Peace Action will be sponsoring a free showing of the movie Nuclear Savage: The Islands of Secret Project 4.1 on Thursday, April 14th at 5:30 pm.  I will give students who attend this event 3 extra credit points.  Here is the flier for the event: 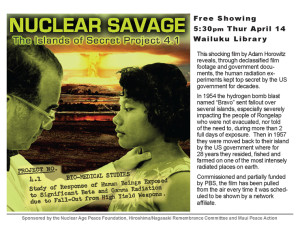 I wanted to relay some information I received in the mail last week.  It was from the Maui County Community Organic Farmland Initiative.  Here is the link to their website: Maui Community Organic Farmland Initiative.  They will be holding town hall meetings at various places around the island.  The organization hopes to add an initiative to the ballot this November that will allow the public to purchase agricultural lands and turn them into locally-owned organic farms.  I encourage you all to check the website.  This initiative provides a solution to how the sugar cane lands may be used.  I will give 3 extra credit points to students who attend any of these town halls.